Bhavan’s Leelavati Munshi College of Education (BLMCE) is the newest addition in the galaxy of institutions under Bharatiya Vidya Bhavan. It has been established in 2016 with the recognition of NCTE and is affiliated to Guru Gobind Singh Indraprastha University, Delhi. Bharatiya Vidya Bhavan, being a Charitable Institution and genuinely serving the cause of education, established this college in order to cater to the ever expanding requirements of quality teachers and educators who can bring about a transformative change in the lives and personalities of their students.  This college is geared towards providing avenues for developing teachers and educators across levels: elementary level, secondary and senior secondary level. To start with the college is starting with B.Ed course. Other courses like Diploma in Elementary Education and Post-graduate Diploma in Educational Administration and Management are in the pipeline.

This college has been name after Late Smt. Leelavati Munshi, wife of our founder Late Kulpati K M Munshi. 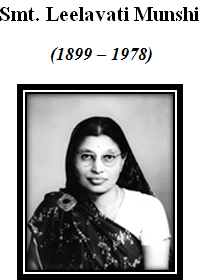 Smt Lilavati Munshi was a freedom fighter and a politician.  She was married at the age of 14 and was widowed. She is a very well known literary critic and had been a critic of Munshi ji’s works as well. In 1926 she married Shri K M Munshi. This marriage raised some eyebrows as Smt. Leelavati was older to Munshiji, and more importantly, she was a widow. But Munshiji did not pay heed to these strictures and openly claimed Leelavati ji to be one of his intellectual inspirations. Leelavati ji was a constant companion of Munshiji throughout his whole life and along with him participated in India’s struggle for independence. She herself is known to be a  literature enthusiast and a noted writer in Gujarati. Besides her literary interests she has played a very instrumental role in India’s struggle for independence and in Indian Politics thereafter. Some of the major roles she had undertaken are as under:

The college derives inspiration from the ideals and innate strength of Smt Leelavati Munshi who epitomises a woman with a great deal of inner strength and a force of conviction which forces people and society to rethink and have a relook at age old societal norms and conventions. She is an icon in her own  right, with her own perspective and vision and was able to contribute to the betterment of women and our country as a whole.

Bhavan’s Leelavati Munshi College of Education is located in the Mehta Sadan of  Bharatiya Vidya Bhavan Builing, Kasturba Gandhi Marg, New Delhi- 110001, one of the most prestigious locations in New Delhi.

Bharatiya Vidya Bhavan genuinely being a Charitable Institution and striving to serve the cause of education has surrendered 10%  of the Management Quota seats  (out of the 100 seats allotted to the College) to the affiliating University, viz. GGSIP University, New Delhi. The University has been requested to fill up all the 100 seats based on their own criteria for admission. The college strives to provide a rich array of experiences to future teachers so as to transform them into real educators who can celebrate the diversity of our learners as well as of the country with a great degree of social affinity. For attaining this objective, Bharatiya Vidya Bhavan in addition to the above has also taken the following steps to provide quality teachers education to the students being admitted to the Two-years B.Ed Course:-

This being the first step, the college strives to provide the best kind of Teaching Learning experiences to its students so that they are set to explore the world of Education with their own prisms of vision and can meet the aspirations and challenges of the emerging global world.

Open Maps Widget for Google Maps settings to configure the Google Maps API key. The map can't work without it. This is a Google's rule that all sites must follow.
Contact Us